It’s difficult to comprehend in a world full of technological advances so far ahead of itself there could be anyone on earth living totally uncivilized. In the east Andes jungles of Peru are between 12 and 15,000 Indians who live in their native aboriginal state.

According to the following article these people make up around 15 tribes yet to be modernized at all.

They have chosen this lifestyle but are increasingly being targeted by loggers or others invading the territory for natural resources.  Rarely are they seen but have wandered out a few times in the last few years as outsiders or planes have flown over their habitat.

Due to the possible hazards to their lives, the Peruvian Government along with other humanitarian organizations such as Survival International are laying groundwork to protect them from becoming tourist attractions.

Known as some of the world’s last “uncontacted people” getting close to humans other than their tribe members open them up to disease and illnesses their bodies can’t fight off. Their immune systems cannot withstand the common ailments of the outside world and have proven fatal in the past killing as many as 50-80% of tribal members. 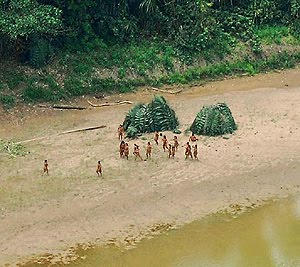 These itinerant tribal groups tend to set up huts where they have before especially along the Amazon River where there is water.

The clans have their own communal laws including kidnapping women and children from other clans using man-made bows and arrows as their defense. Many were exposed to “genocide” in the 1980’s from attacks from loggers and mahogany seekers.

They have tried to live in isolation along the southeastern Amazon of Peru.  However the intrusion of other humans has forced them to be on alert and somewhat dangerous.

One can’t help but be curious about these tribes.

How have they survived generations remaining purely who they were originally?

What do they know about the outside world if much at all?

Are they curious now there may be other people(s) besides them and when was that discovered?

Are there teenage sons and daughters fighting with their parents to find out if they can join the lands of the living?

Do they have gods or worship some spirit that may or may not actually be the God of the universe?

Where does Jesus fit into their lives?  Do they know there is life after death? Have they been exempt from hell because they can’t be held accountable for their uneducated lives?

How do you witness to native aborigines who physically might die in your presence?

Or how do you get close enough without them killing you?

The most recent photo of a Mashco Piro family.

They weren’t put there by accident.

Generations of people just like them have survived in the past.

There is a reason these natives remain.

They are not to be used for bait or vacationer’s photos.

After researching these very interesting Indians, the only solutions to all my questions is that only God knows.

A Connecticut gun manufacturer is moving to South Carolina after Connecticut lawmakers passed stricter gun-control laws in the aftermath of the fatal Sandy Hook School shootings.

PTR Industries will make the formal announcement next week at a ribbon-cutting to be attended by South Carolina Republican Gov. Nikki Haley, according to The Sun News of Myrtle Beach.

The company is going to Horry County, which includes Myrtle Beach, and has already approved a resolution setting out the terms of the company’s move.

Josh Fiorini, PTR’s chief executive officer, says the plant will employ 140 people, many of whom will relocate from Connecticut. The move will take place over three years.

The company said it had been contacted by 41 states and selected South Carolina from six finalists.


Yesterday, the Southern Baptist decided against the Boy Scouts decision to allow Gay scouts in their troops.

I am not a Baptist and may not agree with all of their policies but they are headstrong and committed to their purposes.  My husband is a Deacon and we attend one of the largest in our area.

Such a move is exactly what is needed right now. The stance is built on the rock of the Word of God that homosexuality is an abomination to God.

Media is already running the decision with the expectation of a “mass exodus” of youth in the organization who support it. I have already experienced a church split several years ago for this very issue of homosexuality.  The split resulted in a great loss for those who voted against God’s word.

I can already hear the slander, hate-filled words aimed at the church for standing up for the truth. However, they will find out the Baptist beliefs are steeped in deep conviction of the Bible and its foundation.

Beyond the fact of this decision it is a serious fracture in the Boy Scouts to agree to this change. Growing up as a Girl Scout, I can’t imagine even discussing such an outrageous possibility. A 12 or 13 year old boy who all of a sudden decides he is no longer “straight” has come to this position through the sick influence of those who choose to ruin this country.

I have news for them.

Picking on the Southern Baptist church is like trying to stop a train running at full speed.