Conversations between people can point out quickly how a person thinks, what is on their minds most of the time and their future position.

Secular society is full of cynics. Give them a topic and immediately ripping it apart are the first words out of their big mouths.  It is like they can’t help but be pessimistic or degrading.

However the instant a defeatist shouts misery finding their deep seeded wounds will spill over like grains of sand pouring out of a beach bucket.

One line of doubt after another is a fueled focus of their agenda. Blinded by a destiny of hate, failures, low self-esteem there is no room for change. Why cheer on a bright side when pessimism can be exploited?

The naysayers are not “Kingdom followers.”

On the other side of this conversation are the Joshua’s and Caleb’s. In between the low down dirty gossip and statistical malfunctions of government, education, health care, etc. are the few who read between the lines.

Joshua had some really big sandals to fill. Considered to be a great warrior, he learned the ropes of battle but was true to God’s calling. (Joshua 1) 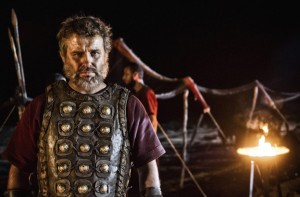 12 spies were sent to investigate the area of Canaan. As the story goes 10 returned with a dishonest report. Joshua and Caleb came back with a different account of the same area.

So….how can that be?

2 opposite conclusions about the same place.

One is negative; the other is positive.

It’s all in how our eyes view what is in front of us. Or is it?

Joshua and Caleb observed the land with supernatural vision. The other 10 couldn’t see past their own noses.

What is in front of us is temporary. Fleshly. Natural.

The 10 spies observed the takeover as hopeless, impossible and bleak.

The other 2 knew their God and what he had done for them all those years in the wilderness.

Both knew he was the God of the impossible:

The God who sent plagues to the Egyptians at the touch of Moses’s staff. (Exodus 7)

Provided sandals and clothes that never wore out. (Deuteronomy 29:5)

All 12 spies had lived through the same hardships, difficulties and some of the most miraculous events in history.

The difference is who knows the Lord on a personal level and who doesn’t.

God teaches those who seek him how to see beyond the Red Seas of life and trust him for a miracle.

God reveals through his word his faithfulness to us by his promises.

God leads us daily as we connect with him on a level of divine yearning just to get to know him.

When the Israelites arrive at the Red Sea the moaning and groaning began.

“Moses, now what do we do? That is a raging river! Why did God bring us here to die?”

The faith of one man stood before the waters and prayed.

He believed this same God who spoke to him in a “burning bush” could do anything and do it now.

He trusted the Creator to make a way for his people to get to the other side of this very large river if it meant he would dry it up instantly.

Moses may have never dreamed God would part the waters, but who cares? It worked.

So which are you?

Do you think God is sitting on this golden throne playing tiddlywinks?

Or do you believe God is turning water into wine? Healing the sick and changing the hearts of the most evil people on earth?

2 thoughts on “What kind of Conversationalist are you?”